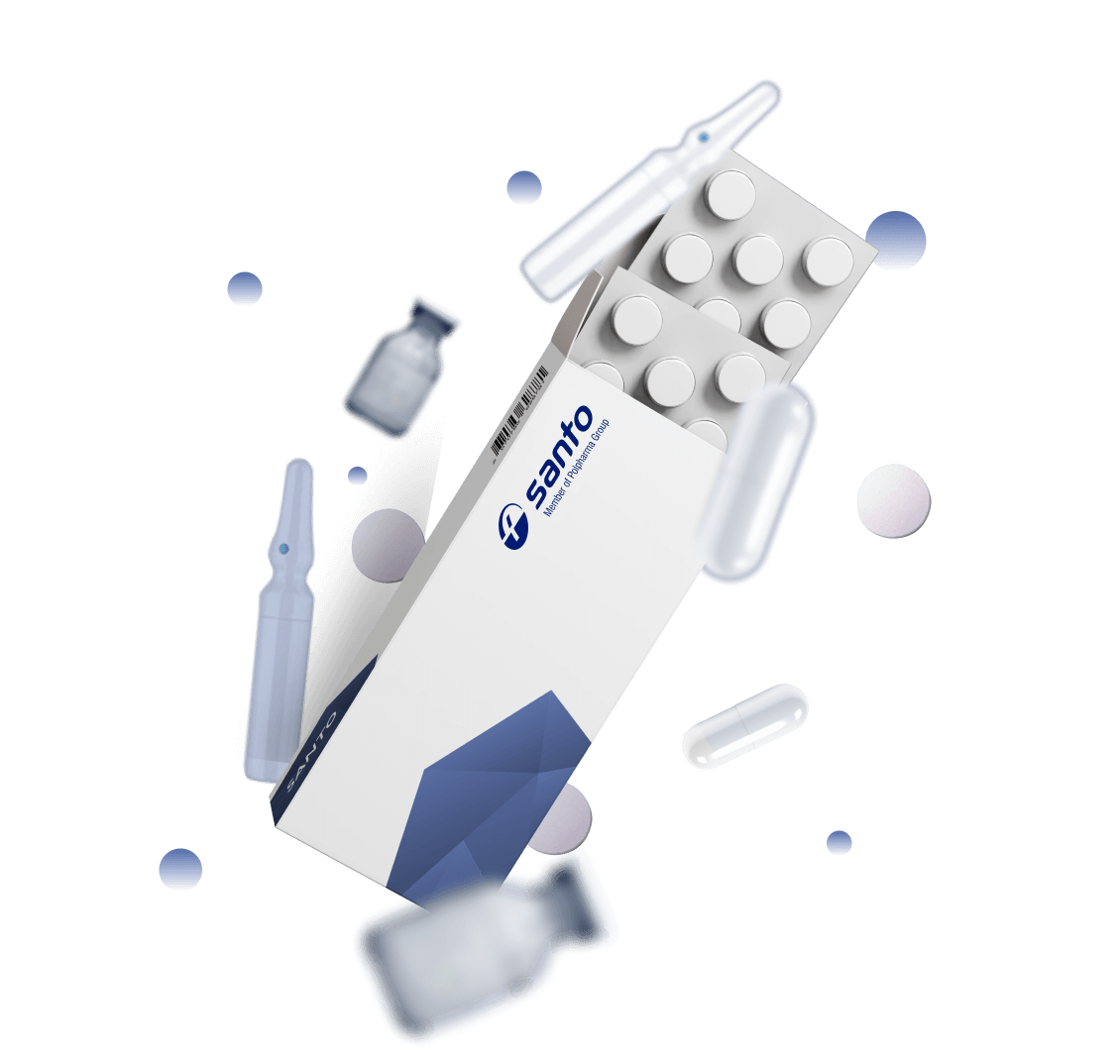 What are biosimilars?
Смотреть видео

Эпосан
SANTO manufactures medicine for treatment of renal anemia and anemia resulting from cytotoxic therapy in oncology Epoetin Zeta, which is presented in our portfolio as Eposan. This is the first Polpharma’s biosimilar in Kazakhstan.

SANTO provides an opportunity for the healthcare system of the Republic of Kazakhstan to treat patients with high-quality biologics at an affordable price. Biologics have been used by patients in many countries around the world for more than 30 years. These drugs have fundamentally changed the treatment of many difficult-to-treat diseases, and have helped prolong and improve the lives of many patients.

However, biologics are very expensive, and in many cases, they are not always available to treat the patients they are indicated for. The development and production of original biologics is a complex process that requires significant financial investments, and therefore, the purchase of such medicines is usually expensive for most patients and burdensome for the healthcare system as a whole. One of the ways to solve the problem of increasing the availability of modern medicines for the general population is to replace original medicines with generics, and in the case of biologics — with biosimilars.

A biosimilar is a medicinal product of biological origin containing an analog of the active substance of a biological preparation. At the same time, the biosimilar shows similarity with the latter in terms of quality characteristics, biological activity, safety profile and effectiveness based on a comprehensive comparability study.

After the relevant patents expire, biologics can be manufactured and sold by companies other than the company that originally brought the drug to market. This new subclass of biotechnological drugs is more often referred to as "biosimilar drugs", they can be referred to as "similar biological drugs", "biosimilars", "reproduced biologically active drugs" or "similar biotherapeutic drugs". Biosimilars or biosimilars are variants of existing biological medicinal products for which the exclusive right to sell has already expired, and which have proven quality, efficacy, and safety characteristics comparable to the original reference medicinal products.

Biosimilars open up the possibility of wider access to affordable treatment. This possibility, over the past ten years, has been equal to the importance of the emergence of generic drugs. Competition in the market, resulting from the introduction of even a limited number of biosimilars, will significantly save up to several billion euros annually, for example, in the case of the European Union (EU) countries. The long-term potential for future savings from biosimilar drugs, including monoclonal antibody biosimilars, will be much higher.

This new direction in biotechnology has developed significantly since the first adoption of regulatory guidelines, standards and laws in the EU in 2004, aimed at bringing this category of medicines to European markets. Since then, more than twenty-five biosimilars have been approved for sale in Europe. Biological medicinal products are obtained from living organisms using biotechnologies and registered through a centralized procedure used in Europe, which is controlled by the European Medicines Agency (EMA). The term "biosimilar medicinal product" is introduced by the EU legislation regulating the relevant approval procedure. As with all medicines, European standards and guidelines have been implemented to ensure the quality, effectiveness and safety of biosimilar medicines. Quality, in this context, means controls and standards that are constantly applied to all processes of production, preparation and processing of the drug. The main aspects of quality considered are the biological potency and purity of the drug, which should be within the limits demonstrated by the reference / reference drug. When developing biosimilars, the latest analytical and biotechnological methods are used, including those that were not available when the reference drug was registered.

Biosimilars in the EU receive approval only after a long and thorough examination of their registration data, which always includes a full assessment of the comparability of expert commissions for evaluating medical technologies, purchasers of medicines and medical devices, and state authorities in the field of price regulation and reimbursement of treatment costs.

About the safety of biosimilars

Since the first clinical use of the biosimilar in 2006, the number of biosimilars approved for market entry and then safely used in clinical practice has been growing every year in the EU.

With the exception of immunological reactions, most drug side effects can be predicted based on the pharmacological action, and occur both when using the reference drug and when using a biosimilar (for example, high hemoglobin levels when using epoetin).

Based on the results of special monitoring of biosimilars for more than 10 years:
of the more than 25 biosimilars approved for use in the EU to date, none has been withdrawn or suspended for safety or efficacy reasons.

Over the past 10 years, the EU drug safety monitoring system has not detected any difference in the negative effect, its strength and frequency, between biosimilars and reference drugs.

Why biosimilars are not considered generic drugs

Biosimilar is not considered as a generic biological medicinal product, mainly because the natural variability and more complex production process of biological medicinal products do not allow accurate reproduction of molecular microheterogenicity. Accordingly, more studies are required to obtain regulatory approvals for biosimilars than for generics, to ensure that safety or efficacy will not be affected by minor changes. The table compares the development process and characteristics of generics and biosimilars.

Patients have the right to have access to safe biological treatments in their fight against diseases that affect their ability to function and threaten their lives. Biosimilars make many of these biopharmaceuticals more accessible to patients, in some cases significantly more accessible. The potential savings expected from the introduction of biosimilars into the EU health system could lead to more patients gaining access to essential medicines.

For doctors, biosimilars are a safe therapeutic alternative for essential but expensive reference drugs. The scientific principle of developing biosimilars is a thorough comparison in terms of quality, effectiveness and safety, aimed at proving the similarity of the biosimilar with the original reference drug. As a result of successful demonstration of comparability of a particular biosimilar to a reference drug, the existing safety and efficacy profiles of the corresponding reference drug will also become applicable to the biosimilar.

For political figures, advisers, and representatives of government agencies and health insurance companies

Thus, biosimilars are a therapeutically equivalent and more cost-effective alternative to existing expensive biopharmaceuticals. This means that more patients can receive treatment within the same budget, and if necessary, treatment can start at an earlier stage. Biosimilars provide a unique opportunity to manage the growing costs of biopharmaceuticals. Just as generic analogues of chemicals are now widely used in the EU health system, and the level of their use is much higher than at the beginning of their use in the 1980s, exactly the same process can be predicted with biosimilar types of biopharmaceuticals. It is reasonable to expect that in the coming years new applications will be submitted and new permits will be obtained for biosimilars, especially for biosimilar preparations of monoclonal antibodies. Everything is from pain